The Bassoon was selected as an Outstanding Academic Title in Music, 2013, by Choice, the journal of the American Library Association. Among the criteria for selection are: overall excellence in presentation and scholarship, importance relative to other literature in the field, originality or uniqueness of treatment, and value to undergraduate students.

"This volume is truly a giant achievement, a vast storehouse of information, and a slow but ultimately very rewarding read. The Bassoon greatly enhances our understanding and appreciation of the instrument, and this reader highly recommends it to players and fans alike." 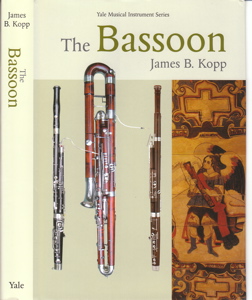 James Kopp draws on the latest research and many years’ experience playing the bassoon, contrabassoon, and early bassoon to provide a lively and informed history of the instrument. He discusses the bassoon’s makers, its players, its repertory, and its audiences, all in unprecedented detail.
Among major new topics covered are the geographical spread of the bassoon beyond Europe to other continents and cultures, the myths long used to explain the bassoon’s origin, and the acoustical decisions made by generations of bassoon makers, including Almenräder, the Heckels, Triebert, and Buffet-Crampon.
A distinctly Spanish tradition of dulcian manufacture and use is reported. The specific uses of the bassoon by composers - extending from Castello and Bach to Mahler and Berio - are examined. The text includes a nation-by-nation account of the intense 20th-century competition between French and German traditions of design and performance. The contributions of Jean Cokken, Friedrich Stritter, and Maurice Allard, among others, make for colorful threads in the bassoon’s long history.
The book draws on the Langwill-Waterhouse Archive, compiled between 1931 and 2007 (now housed at the Edinburgh University Collection of Historic Musical Instruments).
Upon request, your copy can be signed by the author.